It is important to distill when the flowers are at their optimim maturity. The freshly-cut lavender is left to dry for a couple of days in the fields prior bringing to the distillery. 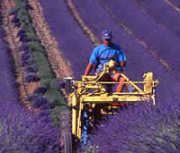 The steam distillation is the best way to achieve a quality essential oil and steam must not be hotter than 100°C. It takes about 130 kilos of fine lavender flowers and only about 40 kilos of lavandin to make one litre of essential oil.

The whole stalk of flowers are tightly packed into a vessel leaving no air pockets in between them. The stills use a pressure gauge. The boiler which runs on recycled distilled lavender heats up the still. The pressurized steam rises, and this steam carries off the essence of the flower. The steam-essence mixture rises through the goose-neck condensation tube, called “col-de-cygne” (which means ‘swan neck’) where it cools off and becomes liquid.

The liquid mixture goes into a separator (in French – a “vase florentin”, or Florentine flask) where it settles. The essential oil rises to the top, for it is lighter than water. The essence-infused water remains at the bottom for it is heavier than the oil. The separator has two taps – the one at the top to draw off the essential oil, and the lower tap to draw off the distilled water, also known as hydrosol, a therapeutic by-product of distillation. This floral water can be used in cosmetics and for certain therapeutic treatments. 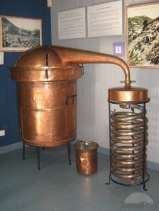 The Lavender Museum exhibits a collection of stills that dates from the 17th century. It shows a film explaining the harvest and distillation process and during the lavender season, there will be a demonstration as well.