A small hilltop village of around 1,500 inhabitants situated at the foot of the plateau of Vaucluse in the region of Provence Alps Côte d’Azur, Roussillon ranks among the most beautiful villages of France. 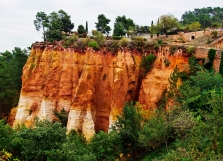 According to a legend, the Roussillon ochreous cliffs owe their colour to the blood of Lady Sirmonde, the wife of Lord Raymond of Avignon, who was so grief-striken by the assassination of her lover by her jealous husband that she jumps off the cliff and committed suicide.

About 40 million years ago, the green sandstones that had been formed during the time Provence was still submerged by the sea became altered by abundant rainfalls of the then – tropical local climate. This weathering led to the formation of the red and yellow ochreous sands.

The ochre lodes in the Luberon are among the richest in the world. Due to the density and variety of their colours, the ochres that are produced in Roussillon are greatly sought-after. 17 different shades are listed: pigments ranging from yellow and orange to red. All the houses in the village are painted with different colours of ochre.

Known and used in handicrafts for paintings, decoration, textile, pottery and construction; it is also used industrially as a colour additive incorporating with other raw materials.

At its peak, there were many quarries operating with thousands of workers from the late 18th century to the 1930s. With the invention of synthetic dyes, the demands for the natural pigment diminished greatly. Nowadays the mining of ochre is prohibited here, in order to protect the sites from degration or even complete destruction.

Though the ochre is no longer exploited in Roussillon, its ochre trails attract thousands of tourists. Tourism is now the largest economy besides agriculture. Cherries, peaches and lavender are grown here as well as wine-making.

At the foot of the village, a landscape of patchwork interlacing with vineyards, olive groves, cherry orchards and almond trees and lavender fields offers the visitors an unforgettable souvenir.

For the photo enthusiasts who are interested to join a photo workshop whereby you will be guided by the experts.  Check out Ian Ford’s Photo Tours Abroad.  Their workshop is timed for the best of the lavender blooms such that you can expect to capture glorious vistas of purple interspersed with traditional stone buildings and a backdrop of mountains. 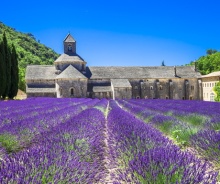